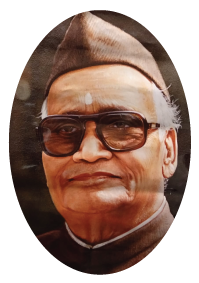 The founder of the Clarks Group of Hotels Babu Brijpal Das ji, was one of the first few businessmen who believed and invested in the Indian tourism story. In 1947 amidst the chaos of partition and the creation of a new India, the Clarks story began with the acquisition of Clarks Varanasi. Subsequently, Clarks Shiraz Agra was the very first 5-star hotel to be registered with the Government of India, in 1963.

He set up multiple trusts to help the less privileged because of his innate humility and generosity. His immense love for Varanasi and its people made them look upon him as a calming yet solution-oriented force in those turbulent times and he was called upon many times to quell religious riots amongst the transitioning communities. At his demise, the reverence that the community had for him was clearly visible, when as a tribute to his legacy the entire city was shutdown and members of all religious faiths were seen praying across the ghats of Benaras.

Inspired by Babu Brijpal Das Ji's life’s work, his great-grandchildren Udit and Anant Kumar formed Brij Hotels, a collection of bespoke hotels at unmatched locations that offer local experiences. They travelled to some of the most exotic and far-flung regions to set up these specially curated hotels. One could be having tea with flamingos, kayaking in a private lake, having a picnic on a summit that was once inhabited by witches or learning to rear cattle with a shepherd over roti and fresh butter when visiting a Brij property.

The mission is to create an ecosystem of sustainable tourism that keeps these habitats intact while economically uplifting it’s communities. This is achieved through employment creation, using local materials and labour for construction, guest services; and the showcasing of local arts, crafts and culture.

Brij’s endeavor is to welcome guests with humility to the remoter areas of South Asia and share it’s vibrant nature with the travelling world.